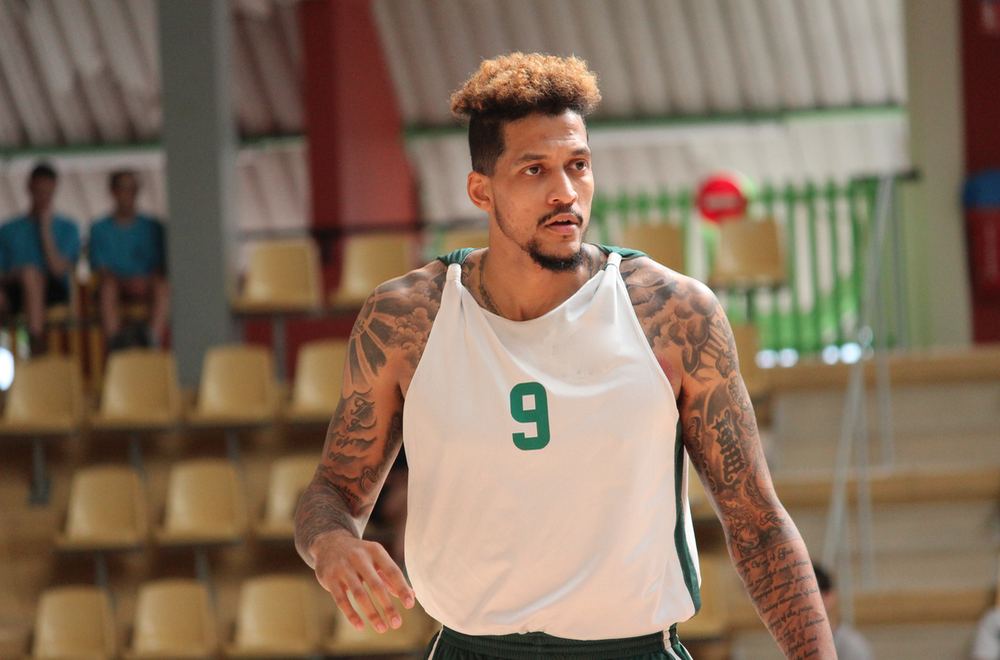 The American “big man” of Virtus Bologna, Julian Gamble (6’10 ”), talks about his career and his goals with the ambitious Italian team.

Can you introduce yourself?
Julian Gamble : My name is Julian Gamble. I was born in Durham, North Carolina. I’m 30 years old, married to my wife L’Oreal and we have two sons, Jay and Lai. I’m from the University of Miami (2013) and this is my 7th professional season.

How did you start playing basketball?
Julian Gamble : I started playing basketball very early. Being from North Carolina, it’s a place where basketball is almost like a religion. Being around one of the biggest rivalries of all college sports, Duke vs. North Carolina, definitely grew my excitement for the game. Also, watching a player like Michael Jordan when I was very young definitely made me very excited to want to play basketball and once I started playing, I loved it immediately.

Growing up, what kind of athlete were you?
Julian Gamble : Growing up, I played basketball very early, like I said. But I also played almost every sport; I was a very active kid, so athletically it made me want to try everything. I played baseball, football, and ran track and field up until I was in high school. From high school on is when I only started to play basketball.

You started your pro career overseas in lower leagues (French 2nd Division, then Belgium 1st Division) where you were dominating a lot your opponents, before competing in a few of the best European national leagues (Germany, France, and now Italy). Is that the path you imagined when you were playing in college and dreamed about playing professional basketball?
Julian Gamble : My professional path has definitely been an interesting one. I am very blessed to be where I am now and it’s all just a testament to hard work. At the University of Miami, I was there for six years due to injuries and also not having the opportunity to play. So, even my chances to play at the University of Miami is something that I really had to work for, and being a part of a championship team in my last season just always taught me to persevere through any difficulties that you have, and no matter what to continue to work hard. Hard work always pays off.  So when it came to my professional career, I knew it wouldn’t be an easy path, I knew I was a talented player, and I knew how to play the game the right way. All I was looking for was an opportunity, and until I was granted that opportunity, wherever I played, I would just continue to work hard.

You finished the 2017-2018 season being the “blocks leader” of the German league. According to you, are blocks, deterrence and defense your hallmark on the basketball court?
Julian Gamble : I think for me and my position, the thing that I focus on the most is just being able to control the paint on both ends of the floor. I know I am a good shot blocker. I take pride being the rim protector for my team. Also, on the offensive end, just being able to finish in the paint, being ready whenever the guards pass the ball, going after offensive rebounds, getting my team extra possessions. Just being the guy that’s inside, doing a lot of the dirty work. I take a lot of pride in that. I love the physical part of the game, I am a very physical player, so I think on both ends this is an area that I excel.

Do you have a specific mindset when you get on the court?
Julian Gamble : My mindset when I get on the court is obviously just to play the most efficient and hard game as possible; do whatever it takes to help my team win. If that day is not my day to score, then that’s fine. I’ll rebound, I’ll play defense, I’ll do something else to get my team closer to the victory. Whatever the team needs, is what I really pride myself in trying to do – just being a leader.
Vocally, getting my guys into the game, always communicating on and off the floor to keep everybody’s confidence high while also keeping everyone and myself sharp and ready to play at the highest level. I think something that’s been big for me is the more I talk and give my energy to my teammates, it helps me to have energy myself. It also helps me to not worry if somebody makes a bad call against me or if I’m not making a couple of shots, but really just focusing on playing a team game and being in it together.  I think just having a mindset of doing this every single day, whether it’s practice or in a game. It’s something that is very important to me.

Virtus Bologna has built an impressive roster during the offseason by adding Milos Teodosic, Stefan Markovic, Frank Gaines, Kyle Weems and you into their roster. Could we say that if the team does not win the championship, or at least, reach the final of the Eurocup, it will be considered a failure?
Julian Gamble :  I think with the roster that we’ve built, obviously with the names that we have on our team, that we have what we need in order to win at the highest level. Obviously, our goal is to win at the highest level and to win every single game. But more importantly, it’s to build a culture, and we are really trying to build something that is going to last many years. Obviously, with guys also signing multiple year deals. I wouldn’t say that not winning a championship this season would be a failure, but it would most definitely be a disappointment. If you look at the work that we have been able to do up until now, we have done some very positive things. But we have a long way to go, we have a lot of hard work to do, and we’re far from winning our first championship but it’s absolutely our goal. So, going into every practice, every single game to play the right way and to make sure that we’re doing what we need to do in order to get victories. After that, we can let our talent take over and just play the game the right way; free flow and let guys be who they are.

Your coach, Coach Djordjevic, is a true basketball legend in Europe. Is he one of the reasons you decided to sign there? After a few weeks playing for him, do you feel that you get better and learn new things every day?
Julian Gamble :  I definitely think it’s been a big privilege for me to be here and to learn and play for Coach Djordjevic. Obviously, like you said, he is a basketball legend both in coaching and in playing. So being around him, his great attention to detail, and the way that we prepare and get ready for games – I’ve definitely learned a lot of things. He has taught me a lot of things, and he is helping me to be a better player and leader… to focus on some of these smaller things that I haven’t thought about before. Just being around a guy like that, that knows what it takes to win is a great luxury for me and I’m excited to continue to learn from him and continue to get better in any way that I can. Again, just to help my team win. All of our goals are the same; it’s to win every game and to win a championship. I think with the staff and players that we have, that it’s very very possible.

You did not rest a lot during the last offseason. Actually, you went directly to China to play after your very long season (63 games played including the BCL final quarter and the French league semi-finals) with Nanterre. Do you feel that you are a bit fatigued, or rather, in the best shape of your career?
Julian Gamble : I wouldn’t say that I was tired. I’m definitely in the prime of my career and in the best physical shape of my life. So I am looking to definitely take advantage of that in these years. Going from France to China to now being in Italy, has had its challenges, but I think that’s just another part of my growth as a man and as a player. To be outside of my comfort zone, and not really have that rest, that off time during the summer that a lot of guys really need, that we all need – just for a mental, physical, and spiritual break from the grind of the European season. But even being here and being around a staff, organization, and a team, that really understands that I’ve gone from country to country and played over the entire calendar year; They have really been great in helping me to manage my body, and to make sure that I am not having any other little fatigue-type injuries. This also goes back to the roster that we’ve built, and having a lot of depth  – that every single night you don’t have to put a lot of minutes in there (maybe a night or two where you have to play a little more), but you can really rely on your teammates and everybody is really helping each other out there so I think we’re making all of our jobs easier for each other.

To conclude, do you have anything to say to your fans over in the States and Europe?
Julian Gamble : To my fans, my friends, and my family, I continue to appreciate everyone’s support. Everything really helps me to continue to do all the things I’ve been able to do. I still stay in touch with people from every stage of my career from Miami to Saint-Vallier, to Brussels, to Bonn, to Nanterre, to China, and now in Italy. I have been to so many places, I have been blessed to be able to play for as long as I have been able to. I pray I can continue to stay healthy and continue to play for many many more years. But without the support of my friends, my family, and my fans, it would be a lot more difficult to be able to do this – I really appreciate you guys, and keep showing love. Thank you!