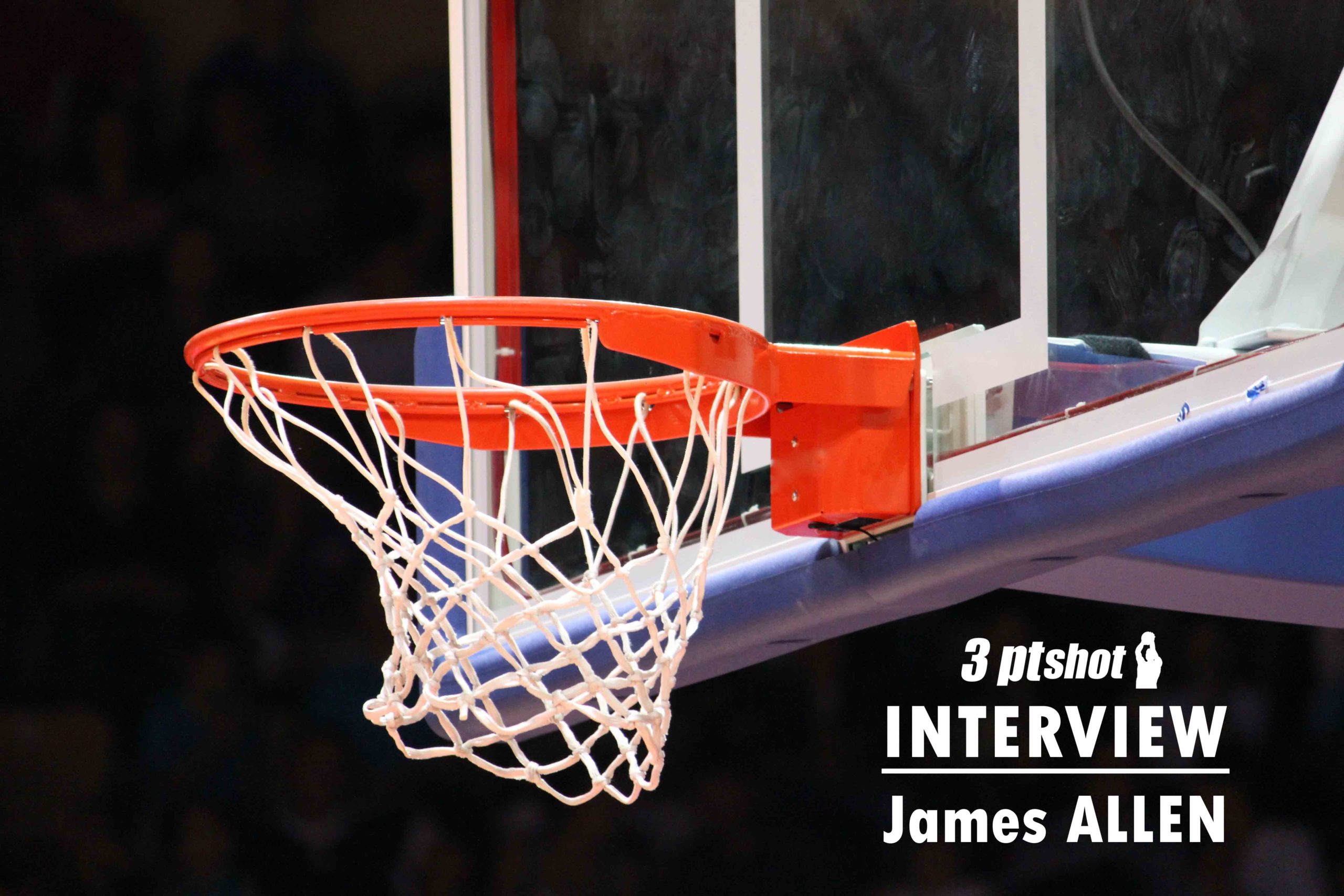 James Allen born in Georgia raised in Indiana graduate of Pike High School and blessed enough to have gone to college in West Virginia NCAA D2 as well as Iowa NAIA D1.

When I began playing basketball it was during Elementary. During the summer my older brother of nine years played for Ben Davis High School and he played after school in front of the house. Being small and young I wanted to play, he wouldn’t let me afraid I would get hurt. Once given the chance I learned about traveling and how to make layups on the ten foot goal. My big brother blocked my shot and I worked on ways to get a layup without him doing so. I even asked my mother’s husband for advice. We watched the lakers game and I saw Kobe Bryant dunk. I jumped off the couch and asked to go outside.
Ever day after school I worked on ball handling, dribbling with two hands and between the legs with one ball. My opportunity to play had arrived in the mail from SportZone were I met a coach that took a strong interest in my game. It was the ending of my first season SportZone when Coach came over, introduced himself and offered me an opportunity to play for his team. Once the second game ended with my new coach, remaining his sponge for the game at the point guard position until high school and he gave me a job working the concession stand at the gym we played in. Anytime coach would contact me it was to play for him on his team or an opportunity to work. Seeing as how he gave me the opportunity to work at the neighboring middle schools, home games in high school and even retail offices to assure this one had a job. My face was well known in the community as an inspirational player who plays with ever fiber of his body.
It all started with the book report on Wilt Chamberlain my 6th grade year and then making the team my 7th grade year in middle school at Guion Creek Middle School. I knew I wanted to be the greatest and having played all kinds of sports I figured out what kind of player I wanted to be young “an unstoppable guard”. All I needed were the legs of a track runner, the perseverance of a football player, the endurance of a wrestler and the mind of a scientist. Having a great head on my shoulders would allow me to think, however overthinking became a reality and over the past few years I have invested my time in meditation.

The basketball path growing up to now is a journey one wouldn’t expect in there wildest dreams. Being a part of this game has taught many lessons about life outside of just playing basketball. When given the opportunity to dominate the competition at any given time in order to make it to the big stage is what players thrive on. My job was to be defensive minded and quick so that I could score by playing defense. A coach during the many years I have been apart of the basketball family, informed me “…that when you turn your defense into of offense you will help your team in more ways then one”. “Offense sales tickets and defense wins championships”.
One can say that learning how to learn to pay close attention to your teammates tendencies was a lesson I could only understand after completing the player I saw myself becoming. It may seem selfish to focus all time and thought on self, however if your package that one plans to offer a team one day isn’t complete then prepare to play a role.
Defense was the key to everything. The offense was relentless and forceful until a good coaching point was made “…use your team… James don’t forget to use your teammates to make it easier on yourself out there.” Being determined it was difficult to grasp this concept knowing my players didn’t work as hard as me because the goal was to outwork everyone in order to lead. It’s a lot of pressure, yet I would rather be the one taking the blame if it will help the team carry on.
Fouls in college were different, rules began to change on how to defend the opposing team with or without the ball. Adjustments had to be made in order to play and given the opportunity in Iowa to make a defensive video was just what the doctor ordered for my game to elevate.
Offense. Where to begin with a part of the game i can say I love the most, since it’s a battle of the minds. Learning how to use my team was just the icing on the cake. Penetrating the defense’s zone sets became an art, breaking down defenders became like performing dissections and play calls became a riddle only solved by the riddler himself. However, that’s all just speaking about my mind nothing to do with my body and how “…practice doesn’t make perfect, perfect practice just makes you good, and repetition is what yields success.” -James D. Allen
Gifted with energy to rebound at an early age landed me a job in high school as a four man. Not understanding the need to play down low I grasped everything in practice, gave the game so much of my energy and time. When it came to our first game of my freshman season I fell asleep on the bench and landed on the C team. Playing only when coach allowed me to, this trend continued throughout college and carried over to the next college where i respected the coaches comment, “…your not the best player on the team and to be honest…” that’s when my fire turned on and I asked to play with the Reserve team. Personally, to learn more of the system and help groom the upcoming players for the years to come for the school tradition of high energy basketball.
Practicing countless hours in the gym on all aspects of the game after workouts can take a toll on your mind and body. The time spent away from the game competitively was enough to allow me to relax and control this other part of me that wants to show why hard work pays off. I find myself now watching the recorded games just to watch the tendencies of players I can see myself playing with. Knowing where they score most and having a good feel for talent is what allows me to make the team better when I’m not geared on taking over.

Describing my game can be simply put as a chess match played on a Rubik’s cube board in the 5th dimension.
Main strengths on the court are being vocal, versatile and methodical to a certain extent because creativity is what brings this game to life.

« We have the power to influence so many people one day at a time that can make a great impact on the young minds of the future. » James Allen

Have you ever traveled abroad for basketball?

No, I have never played abroad for basketball.

What kind of opportunity are you looking for?

The best fit opportunity would be one that will allow more growth in the game. Learning is the biggest tool. Preferably have the chance to learn more about ball movement and ball fakes on top of how to strategize against championship teams in order to become a champion is the goal. Remaining a champion is where the hard work comes in and having a strong training staff, supporting coaching staff and a team that is willing to take things in stride to understand, “…that this season and ever game from this practice forward will prepare use to achieve a goal of gold. If we ever part ways or endure an injure we shall know that we have it our all today and everyday. The energy we plan to bring will not be enough to win, but it will be enough to overcome the odds in the end. Together. Family. Team on three. One Two Three TEAM!!!!!!!!!!!!!!!!” -James D. Allen

What do you expect from your pro basketball career overseas?

Expectations are high, yet the ability to understand humble beginnings is enough to embrace any team. “There is no escalator to success only stairs” -unknown
My pro career should yield challenges that will allow myself an opportunity to play at the highest level and achieve a spot amongst the greatest to ever play. It will take a lot of time and effort, however this game is the love of my life and I plan on giving her everything I got with hopes that I could inspire just one person along the way everyday not to give up on the reason they chose to play basketball that one summer day.

To conclude, do you have something else to tell?

Having all the emotions, passion and desire to play this game. Can leave a player feeling drained and battered, have one feel as if the world is coming to an end when one doesn’t play or even force on back into there shell for safety. The world will always view a striving athlete with no success as an example for why you shouldn’t give your all to something that’s not promised. A player could feel as if there is no reason living without playing since all the sacrifices leading up to the point one may feel like giving in to peer pressure to relieve pressure. It’s at this point where character speaks volumes, it’s at that very moment one has to look themselves in the mirror and make the decision for life. It’s always going to be fun, and sacrificing has taken a lot out of all of us. The end of it all has to be peace. It has to be a point that one understands that when all else fails, it’s our mind that we can share with everyone else. We have the power to influence so many people one day at a time that can make a great impact on the young minds of the future. Basketball is not a game is a way of life teaching us lessons that can shape others forever.